Home / Articles / Escalation Or Negotiated Settlement Of The Ukraine Conflict?

Escalation Or Negotiated Settlement Of The Ukraine Conflict? 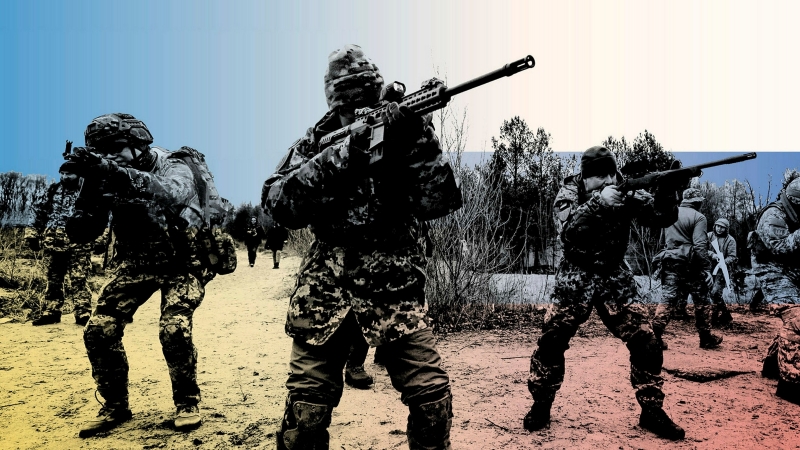 Note: This article was written with information available up to September 24. Due to the rapidly changing situation, it is possible some information may be outdated by the time it is published.

Recent gains by Ukrainian forces in the Kharkov region has sent NATO propaganda into a feverish frenzy of naive and premature celebration. The admittedly unexpected and fast-paced advance of Ukrainian troops, heavily backed by high-end NATO military hardware and relying for large part on foreign mercenaries including the infamous Blackwater organization that nowadays goes by the name of Academi, was heavily overblown in western corporate media as if it were the beginning of the end for the Russian special military operation.

In reality, the greatly reduced Russian military presence on the frontline apparently withdrew in a relatively organized manner. The withdrawal was brisk and left much of the territory, including the city of Izyum, mostly empty by the time the Ukrainians even approached it.

The Kharkov offensive furthermore needs to be put in its proper context, as the second major Ukrainian attack in the month of September 2022. Earlier that same month, the Kiev regime had amassed a major force of up to 30,000 troops in the Kherson region in the south, an area immediately bordering the Russian federal republic of Crimea. Despite massive troop concentration dedicated to forcing a breakthrough, the EuroMaidan regime utterly failed to shake the frontlines in any meaningful way. The Ukrainian failure in Kherson was so complete that its propagandists even tried to claim soon afterwards that the entire operation in the south had been a mere “disinformation operation to trick Russia” and that the real offensive had been the one in Kharkov.

Regardless, by the second half of September, the situation in Ukraine had changed to such an extent that the EuroMaidan troops had advanced in the northeast, taking Izyum and Kupyansk as the major prizes in their Kharkov campaign. Russia, however, still holds sway over much or all of the oblasts (province) of Donetsk, Lugansk, Kherson and Zaporizhia. In other words: the Donbass region proper and one clear, straight path towards the Russian region of Crimea is under Russian control. In terms of the original aims of the Special Military Operation (SMO) when it started in February, Russia has met most of its goals that never included controlling Kharkov in the first place.

On the frontlines in Donetsk, allied forces of the Donetsk People’s Militia and Russia have been steadily advancing on the key city of Artyomovsk, or Bakhmut as it has been called by the EuroMaidan regime since 2016, with reports claiming the Russians had been taking parts of the industrial area of the city and advanced into residential areas by September 20. Around the same time, reports said that Ukrainian forces withdrew from the small bridgeheads they had established during the Kherson offensive. They returned to their earlier defensive positions on the frontline despite suffering over 1,500 dead in taking the small parcel of land.

Now we come to the key aspect of the SMO that is all too often forgotten in mainstream media: Russia has so far not been officially in a state of war with Ukraine, nor has the Kremlin ever issued a call for general mobilization. This may sound like semantics, but it is a very important distinction. Far from being a mere euphemism as so many western pundits laughingly put it in February 2022, the SMO is seen by Russia as a seriously and wholly different situation from actual war.

In Russian military optics, the SMO was merely a campaign of military support for Lugansk and Donetsk, two countries that had been officially recognised as independent and allied states. The fact that this situation is different from actually going to war was recognised even in Donetsk proper, where former Defence Minister of the People’s Republic, Igor “Strelkov” Girkin, condemned already in March what he saw as a much too relaxed and limited response from Moscow.

“Without at least a partial mobilization in the Russian Federation, it will be impossible and highly dangerous to launch a deep strategic offensive against the so-called Ukraine,” Girkin predicted in April, a claim he has repeated again after the Kharkov setback.

In reality, the SMO label means that the vast majority of Russian Armed Forces is not involved in any combat operations against Ukraine, and in fact has not even been mobilized for active duty. The highest estimates from western sources place the total number of participating Russian troops at around 195,000, which roughly corresponds to the size of the Ukrainian Armed Forces.

Generally, this consists of volunteer units that specifically opted to be deployed in the operation, often National Guard forces such as those from Chechnya under Ramzan Kadyrov. However, the Russian Armed Forces in its totality numbers over one million active personnel, with 2 million more serving as reservists. If the war is officially declared, these units could be mobilized at lightning speed, and create a modern version of the “Russian steamroller” that has for centuries been the stuff of nightmares for western political leaders. It needs no further elaboration that such a deployment would completely alter the equation of the conflict.

While talk about what would happen in case of open war has often seemed mostly hypothetical so far, the rapidly changing pace in late September has made this question all too real. On September 20, the Donetsk and Lugansk People’s Republics announced plans to organize a referendum on potentially joining the Russian Federation as a member state. The same decision was made by the military-civilian administration of the regions of Kherson and Zaporozhia, with the referendums of both People’s Republics and the two regions being scheduled from September 23 to 27.

Once again, contrary to NATO propaganda claims about “Russian occupation of Ukrainian land”, it can in reality not be overstated how much of a pivotal difference it would make if Lugansk, Donetsk, Zaporozhia and Kherson were to join Russia. Instead of Russian military participation in the region being just a form of support for Donbass, the conflict could spiral into a full-scale war between Russia and Ukraine.

Moscow has warned that any attacks against any of the four regions once they join the Russian Federation would constitute an act of war against Russia itself. This would pave the way for a total mobilization of millions of troops Russia has in reserve. Or, as Foreign Minister Sergey Lavrov said: “The entire territory of the Russian Federation, which is confirmed and can be further confirmed in the Russian Constitution, is certainly under the state’s full protection.”

In fact, such mobilization has considerable support among Russian political figures. The Communist Party of the Russian Federation has already called for the “full mobilization of forces and resources”, with its General Secretary Gennady Zyuganov stating that the conflict is already a “full-fledged war” in reality, adding that “You take it to the very end, either victory or defeat. The question of victory in the Donbass is the question of our historical requirements, and everyone in this hall should realistically assess the situation.” Sergey Mironov, leader of the social-democratic A Just Russia opposition party, went as far as calling for “the physical elimination of gang leaders” and described Vladimir Zelensky as ‘the leader of the Nazi state and the main terrorist.”

Mikhail Sheremet, member of the Security Committee of the State Duma, voiced similar concerns: “Without full mobilization, moving to a war footing, including for the economy, we will not achieve proper results.” Ramzan Kadyrov, the battle-hardened head of Chechnya, sided with these requests as well: “If you ask me my opinion as Ramzan Kadyrov, I would declare martial law, I would declare mobilization.”

Far from Russian public opinion turning against the Kremlin, or demanding an end to the military operation, it turns out that President Vladimir Putin and Defence Minister Sergey Shoigu were actually holding back further escalation despite popular calls for a more speedy and heavier-handed approach. However, this too was set to change rapidly.

On September 21, Putin declared a partial mobilization of the Russian Armed Forces, calling up part of the reservist units for deployment in the conflict with Ukraine. He also warned Ukraine and NATO against any further escalation, especially if the regions in historical Novorossiya would vote to rejoin Russia. Defence Minister Shoigu gave more details in an interview the same day, clarifying that Russia was de facto “at war with the collective West”, stating that as a first step, 300,000 mobilized troops would be sent to reinforce the frontlines.

There is no credible indication for any significant war weariness in Russia at this point, let alone sympathy for the Kiev junta and its NATO backers. The support level for President Putin still comfortably reached over 80% on September 23. If anything, there seems to be impatience about the perceived lagging speed and lack of significant manpower dedicated to the fight to denazify Ukraine. Far from the loudly proclaimed collapse of the Russian offensive, or even of the Russian Federation itself, it seems that the few punches that Russia has had to take, has only bolstered the Russian national ethos, and encouraged the Kremlin to up the ante and step up to the challenge.

Western rulers need to understand that Russia will not back down because it sees NATO expansion to its borders as an existential threat. It is up to the collective west to decide whether they want to esclate the situation into a potentially catastrophic international conflict or seek a negotiated settlement. Ukraine cannot win this and Russia cannot afford to lose. Its continuation will only result in more Ukrainian deaths.

Russia on way to Achieving Its Objectives in Ukraine

Moscow Ran out of Patience with US Belligerence in Ukraine

Why Qom Pulled It Off, But the Kremlin Couldn’t