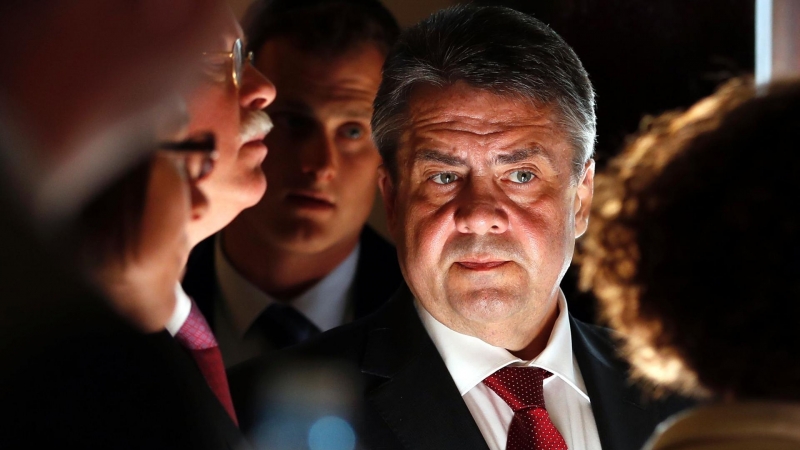 Gabriel was clearly upset with Netanyahu’s blackmailing tactics and said Germany would not “become a political football for Israeli domestic politics”. He went ahead meeting the rights groups to hear about the Zionist regime’s atrocious crimes against Palestinian women and children.

Netanyahu then cancelled his meeting with Gabriel. The German foreign minister clearly took this as an affront and refused to put up with such behavior that is the signature mark of the pushy Zionist.

He thought he could push Germany’s top diplomat the same way he does American leaders. In March 2015 for instance, Netanyahu went to address the US Congress without even notifying President Barack Obama and lashed out at American foreign policy.

Members of Congress not only took Netanyahu’s insults but they applauded him, clearly signifying that the Zionists control America.

In the celebrated words of Pat Buchanan, political commentator and speechwriter for former US President Ronald Reagan, the US Congress is Zionist occupied territory.

German Foreign Minister Gabriel seems to be made of different mettle and finally said, enough is enough.

Aware that he may have pushed his luck too far, Netanyahu tried to make up for the insult he had heaped on Gabriel by calling him “to explain my position and to clear things up.”

Speaking to the German newspaper Bild today (April 28), Netanyahu said he tried to clear things up with the German foreign minister but he would not take the call.

In the Bild interview, the Zionist claimed, “Foreign diplomats are welcome to meet with civil society activists and members of the opposition and anyone else they’d like. But my red line is that I will not meet diplomats who come to Israel and lend legitimacy to fringe radical groups that falsely accuse our soldiers of war crimes and undermine Israeli security.”

It takes chutzpah but the Zionists are nothing if not pushy and obnoxious. They think the world owes them an apology for what happened during the holocaust more than 70 years ago.

While that was a horrific crime, the Zionist State blackmails Germany for holocaust reparations to this day. These, however, are not given to family members of the victims of the holocaust but pocketed by the Zionist regime.

The Zionist regime did not exist when the holocaust occurred. So how can it pocket such money? Blackmailing and extortion are traditional Zionist trademarks. They even extort money from poor Jewish people.

Germany seems to be getting fed up with Zionist misconduct and is beginning to show its displeasure. Last month, Germany cancelled the annual meeting between German and Israeli leaders scheduled for May. At least one Western government is able to muster enough courage to tell the Zionists they will not put up with their obnoxious behavior.

Germany has shown that it is not the US and would not tolerate such Zionist insults. It is important that more Western governments stand up to the pushy Zionists. This is a good start.

Netanyahu’s Likud coalition behind in polls