Israel in the vanguard of India’s escalating conflict with Pakistan

Poverties is widespread in India yet it spends tens of billions of dollars on weapons and aligns itself with such pariah states as the Zionist occupiers in Palestine. Both have gained notoriety for oppressing minorities and denying them their fundamental rights as they pursue the toxic ideology of 'ethnic democracy'!

For a considerable period of time, Israel has been tirelessly lining itself up alongside India’s nationalist BJP government in a politically perilous association.

In the process India has become the largest weapons market for Israeli arms trade.

In many ways, today’s India is fast changing and has become monstrous from what it was a decade ago.

State tyranny, criminalization of opposition and attacks on minorities are not new.

But the latitude of the state machinery, its forever-ready army of extremist supporters, the breakdown of institutions and the irreparable damage this has brought upon the society is unparalleled in post-independence India.

From being a global champion of Palestinian solidarity, India has morphed into Israel’s closest collaborator.

This dangerous and hazardous relationship between the two nuclear powers has exposed a remarkable affinity between India’s Hindu nationalists and the Israeli right.

It is entrenched in the deep approval of generations of Hindu nationalists who have cherished the dream of a Hindu-nation state a la Israel.

The concept of Hindutva or Hindu Nationalism was spawned almost a hundred years ago. The founding fathers of this nationalist movement called the Rashtriya Swayamsivak Sangh (RSS), Vinayak Savarkar and Madhav Golwalkar, openly admired Zionist ideology and its colonial project of Apartheid Israel.

It is quite revealing that RSS has been great admirers of Adolf Hitler, one of the most hated man in history.

India has also adopted the concept of “ethnic democracy”.

Zionist scholars have defined ethnic democracy as “an alternative non-civic form of a democratic state that is identified with and subservient to a single ethnic nation.”

This ideology makes a clear distinction between members and non-members of the ethnic nation.

Non-members are seen as undesirables and a threat to state security.

The distinction made between members and non-members has spawned a controversial amendment to India’s citizenship laws (The Citizenship Amendment Act and the National Register of Citizens) that has been strongly advocated by Modi’s Bharatiya Janata Party (BJP) government since 2016.

Ethnic democracies do not totally eliminate or marginalise citizens regarded as undesirables.

Although Israeli Arabs enjoy some cultural and religious rights and a token representation in the Knesset, an array of formal and informal policies guarantee that the Arab community remains ghettoised in depressed communes, consigned to what is in effect second-class citizenship.

Sri Lanka is governed by Buddhist Nationalism and Croatia is declared a nation state of the Croatian people, where the minorities remain oppressed and subjugated to the majority ethnic population.

Ethnic democracies create a hierarchy of citizenship in which some are full, first-class citizens and others are second class at best.

The founding fathers of Hindu Nationalism or Hindutva, Savarkar and Golwalkar laid down an ideological creed nine decades ago. They declared that the Hindus are the nation in India.

All non-Hindus will remain mere communities and wholly subordinate to the Hindu nation.

They envisaged an Indian nation-State as exemplified by Israel and not Pakistan.

The BJP of Modi, the political arm of RSS, aspires to establish this Indian optional but abnormal variation.

False-flag terror operations is a good example of this propaganda machinery.

On close examination of the 9/11 attacks in the US, Madrid in March 2004, and the London bombings in July 2005 amongst others, a clear picture emerges.

No bona fide organisation claimed responsibility for these operations.

The respective governments failed to identify the perpetrators forensically and they have shown no desitre to carry out impartial, thorough and transparent investigations of the crimes.

Also, in 2011, a Hindu priest, Swami Aseemanand confessed in court that he, together with others, were linked to a Hindu terror network that were responsible for a wave of deadly attacks and blamed on Muslim radical groups.

Attacks were carried out on a train, the Samjhauta Express, travelling to Pakistan, a Sufi shrine in Ajmer and the Mecca Musjid.

Two assaults on Malegaon, a town in southern India with a large Muslim population were also carried out.

He also suggested that they had links to the official Opposition Party, the Bharatiya Janata Party, now in power in Delhi.

India is facing challenges to the foundations of its 1947 Constitution.

Secularism and religious tolerance are being replaced with religious bigotry and discrimination.

Freedom of expression is systematically under attack and the police have started rounding up activists for daring to speak out.

Ibrahim Vawda is with the Media Review Network in Johannesburg, South Africa. 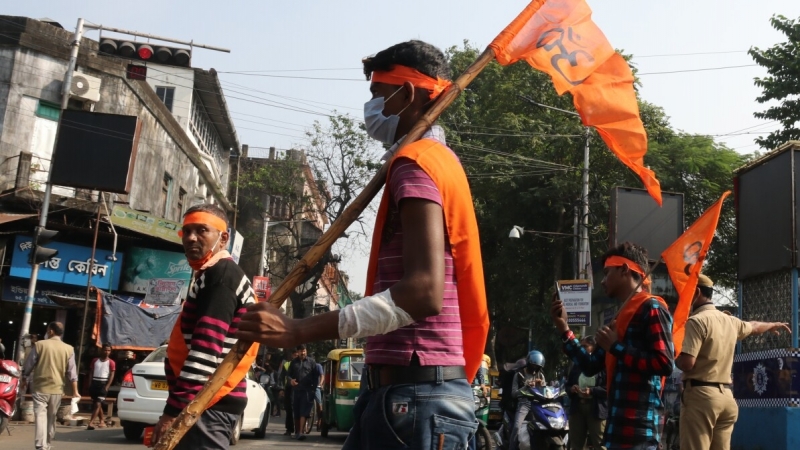 Collective Punishment Must Be Called Out: In Palestine and In India