Home / Articles / Will the Dollar Die of COVID-19?

Will the Dollar Die of COVID-19? 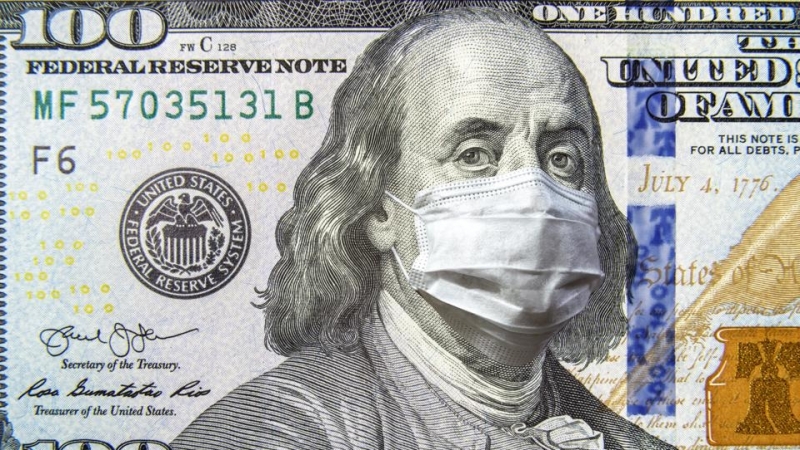 Today’s main object of idolatrous worship—the “almighty dollar”—has dominated the world since World War I, and ruled unchallenged since World War II. The pseudo-sacred greenback, like all idols, is worshipped in temples that you can easily find by going to the central districts of the idolaters’ biggest cities and looking for the tallest, most dominant buildings.

Today’s temples of dollar-worship are skyscrapers that arrogantly thrust themselves into the heavens as if to challenge Allah. These disharmonious and generally ugly edifices symbolize the relative size of their owners’ egos, which are roughly proportional to the size of their bank accounts.

Unlike ancient idolaters, dollar-worshippers usually do not conduct human sacrifices inside their temples. They merely plan and direct horrific hecatombs from within the sanctity and safety of their sacred high-rises. The actual killing—the unprecedented bloodshed of the wars of the modern era—takes place far away, usually across the seas, victimizing the unfortunate inhabitants of lands whose leaders have not prostrated themselves before the almighty dollar with sufficiently enthusiastic obsequiousness.

The dollar god has guzzled more human blood than all the other idols in human history taken together. Established as the “god of this world” by World War I (40 million killed), raised to full global hegemony by World War II (85 million killed), and maintained by the post-World War II “American Holocaust” (William Blum’s term) that has slaughtered about 60 million people in military and CIA interventions, the dollar has far outperformed the Aztec and Mayan gods for whom beating human hearts were ripped out of living breasts, as well as the Mediterranean god Moloch for whom children were burned alive.

Given this record, it is not without a glimmer of hope that we now contemplate the impending demise of the dollar. Macroeconomic and demographic trends strongly suggest that the yankee greenback may be nearing the end of its century-long run as the global reserve currency.

The only questions are the precise date and manner of death, and what will replace it.

One possibility, increasingly whispered about in financial circles, is that the dollar may die sooner rather than later, and that its cause of death may be listed as COVID-19. Fortune magazine, normally not a hotbed of anti-imperialism, recently published an interview with currency expert Stephen Roach suggesting that the dollar is definitely heading down, and possibly down-and-out, with a new global reserve currency emerging as some combination of the Euro, Renminbi, and gold.

How could COVID kill the dollar? By highlighting the USA’s loss of economic, technological, ideological, and military supremacy. All of these American advantages have eroded considerably from their peaks more than a half-century ago. Suddenly, in 2020, the COVID crisis is forcing the world to confront the possibility that the US and its dollar are increasingly hollow idols.

Today’s dollar idol may still have glittering gold on the outside, but it is empty on the inside. It wasn’t always that way. Absolute dollar hegemony was formally established by the 1944 Breton Woods agreement, which made the dollar a stand-in for gold. By selling WW2 armaments while suffering fewer losses than its rivals, the US had devoured the lion’s share of global gold reserves, so it could print almost unlimited dollars backed by almost unlimited gold. But by 1971 the rest of the world had caught up with the US economy, which had been badly wounded by exorbitant Vietnam War expenditures. Suddenly the world wanted to trade in their dollars for gold, threatening to empty Fort Knox.

Richard Nixon (known as ‘Tricky Dick’) and his equally devious National Security Advisor Henry Kissinger decided to swindle the world. Like a bank that refuses to give depositors their money, the US unilaterally decided to stop giving dollar holders the gold that those dollars represented. Instead, Kissinger convinced Saudi leaders to promise to sell oil only in dollars (while secretly orchestrating the 1973 war and subsequent oil price increase). From that point forward, the world wanted dollars not because they represented gold, but because they were the only way to obtain oil. And thus, the so-called petrodollar was born.

History teaches us that a global reserve currency must be linked to a scarce and desired commodity—whether gold, as with the 19th century pound sterling and the pre-1973 dollar, or oil, as with the post-1973 petrodollar. The “exorbitant privilege” of issuing global reserve currency, and thereby gaining the ability to overprint currency and force others to accept it, belongs to the country that enjoys the economic, technological, ideological, and military power to seize control of the key commodity or commodities.

As the biggest economy of the Western bloc and its Anglophone avant-garde, the US has been captain of the ship that has dominated global trade for more than a century. Consider the following graph from ISA-world.com:

In 1950, the West accounted for almost 60% of global economic output. That figure will nearly shrink by half, to close to 30%, by 2050—even more by some estimates. Long before 2050, Asia will have eclipsed the West, and China the US, in terms of economic production. And since it is wealth that buys technological, military, and to a lesser extent ideological power, the US will— assuming the above projections are even remotely accurate—inevitably cede its role as global hegemon, and with it its privilege of printing dollars as global reserve currency.

The coronavirus crisis may be hastening the inevitable. In the second quarter of 2020, the US suffered its steepest drop in economic output ever. Consumer spending cratered, plunging by almost $2 trillion (roughly 15%). The national debt soared from $21 trillion to $26 trillion. The money supply (M2) ballooned from $14 trillion to $18 trillion as the Federal Reserve and Treasury Department were handed over to the kingpin Larry Fink’s Blackrock criminal consortium, which now owns the US dollar printing press unhindered by any real oversight.

While US and Western economies have been crippled by the coronavirus, Asian and Chinese economies quickly rebounded and are poised to continue recovering toward their pre-COVID levels of rapid growth. If the US continues to cycle through lockdowns, panics, and aborted attempts at recovery, the trendlines pointing toward Asian economies overtaking the US-led West may have to be revised; it may now take only a few years rather than a few decades.

Compounding Washington’s and Wall Street’s problems is the fact that the Western alliance, the bedrock of American hegemony, is fracturing. The Trump regime has worked overtime to alienate allies as well as adversaries, and the results were recently put on display at the United Nations Security Council: “Iran sanctions: nearly all UN security council unites against ‘unpleasant’ US” announced the Guardian headline, a situation other media correctly described as an “unprecedented defeat” for an “illegal” US attempt to impose its will on the world. Never before in history had the world slapped Uncle Sam’s face so fearlessly—and the loss of American soft power due to Washington’s coronavirus bungling undoubtedly played a role.

Various factors, including COVID-triggered economic devastation, red-vs-blue and police-vs-protestors fractiousness, and increasingly visible high-level corruption (Jeffrey Epstein) have combined to reveal the true scope of American imperial decadence. Increasingly, the world views the US hegemon not with fear and awe, but with pity and disgust.

Additionally, COVID has exposed the bankruptcy of US-led neoliberalism and the liberal school of secular humanist thought upon which it is based. Political liberalism is an every-man-for-himself philosophy: Forget about forging any collective agreement about God and the good, and instead let each individual pursue happiness in whichever way he or she chooses. Unfortunately, the lowest-common-denominator pursuit of happiness tends toward materialism and corruption. It encourages the lower nafs and fails to nourish the soul and spirit. Inevitably, a liberal society must follow the path toward collapse charted in Ibn Khaldoun’s Muqaddimah: decadent, depraved, and fractious, it implodes and gives way to a new polity held together by asabiyyah, or social solidarity based on a sense of shared purpose.

American neoliberalism has failed to meet the COVID challenge, in part because liberalism-sapped Americans are no longer capable of uniting to sacrifice for any larger collective purpose. In contrast, Chinese socialist-capitalist Confucianism, despite being ultimately just nationalist “confusionism,” has at least temporarily succeed in uniting China behind the collective purpose of material improvement in general, and stopping COVID in particular.

Meanwhile Islam, the culmination of monotheism, awaits its turn to return to the front of the world stage by uniting people behind the collective purpose of worshipping and submitting to Allah (swt). Though the pattern is unmistakable—materialist and/or idolatrous civilizations eventually collapse into picturesque ruins—the details and timetable of the collapse of the modern materialistic civilization of the one-eyed Dajjal, who sees only with the material eye but is blind to the spiritual, remain to be seen.

Dollar vs Gold: Go for the Gold

What/Who will Replace the US Dollar?