The Ansarullah Islamic movement in Yemen has astonished most observers as it has withstood the five-year onslaught waged by a coalition of heavily armed states. A grassroots movement established in the 1990s as an Islamic youth group named Muntada al-Sha‘b al-Mu’min, it used to organize summer camps and offer social programs. Now it is a regional player with global influence. How did the movement grow and then manage to withstand daily attacks by armies of several countries equipped with the most sophisticated weapons?

The Ansarullah was forced to fight six wars against the Western-backed autocratic regime of ‘Ali ‘Abdullah Salih between 2004 and 2010. The Salih regime saw their social and political work as a long-term threat and resorted to crushing the emerging movement by using military force. This policy was shortsighted and backfired in the long run. True, initially the Salih regime gained the upper hand militarily, but the regime’s resorting to military force against the Ansarullah compelled them to build a military organization. Also, armed conflicts with the Salih regime gave the movement much-needed combat experience.

Uprising Today, an independent online news website, which focuses on Yemen from the perspective of the resistance, regularly posts combat footage of Ansarullah forces. The footage reveals that the Yemeni resistance has turned its disadvantages into battlefield advantages.

By analyzing reports from open sources it is clear that the terrain is the most effectively utilized tool of Ansarullah and the biggest disadvantage of its adversaries. It is rare to see Ansarullah fighters driving vehicles or even walking on roads during combat operations. The Yemeni forces generally move on foot through terrain inaccessible to vehicles. This makes it difficult for the overweight Saudi soldiers to counterattack Yemeni soldiers in a swift operation and use their numerical superiority to overwhelm them. Hostile terrain severely limits the logistic ability of the invading forces to move large numbers of troops toward the combat zone.

The Yemeni forces operate as small mobile groups to carry out attacks. This mode of operations allows them to appear and disappear quickly. It has the additional advantage that this eliminates the bureaucratic chain of command system used by conventional armies. Group leaders can make necessary decisions on the spot without losing time to consult the high command. This also does not allow the Saudis and their allies to utilize their electronic superiority to intercept communications between field commanders and the higher chain of command, thus creating an intelligence-gathering gap in tactical intelligence.

Motivation is an important factor that enables armies to achieve victory. Ab-sence of motivation among the Saudis and their local mercenaries is evident from viewing video footage of attacks on Saudi outposts within the dark Kingdom and their established outposts inside Yemen. In many instances it can be seen clearly how Saudi soldiers simply abandon their posts when they come under heavy fire even though they possess far heavier weapons. They can hold on to their positions until air support arrives. All they need to do is establish a defense perimeter and keep firing until the US-supplied jets arrive to bail them out. Instead, the Saudis simply run away. The Yemeni forces’ high motivation is demonstrated by the fact that they frequently engage the Saudi military in close combat rendering their long-range weapons useless and denying them the use of heavy artillery.

The Ansarullah fighters are also rarely seen utilizing tanks and other heavy combat vehicles, knowing full well that it exposes them to Saudi air attacks. Additionally, in open desert terrain, tanks are easy targets for armies that possess long-range artillery, something the Saudis have in abundance, thanks to supplies by their NATO masters.

The Yemenis have managed to modify conventional military tactics in very unconventional ways. Their use of drones in almost guerrilla-style operations highlights how the Yemenis managed to jam billion-dollar Saudi air defenses and utilize drones as long-range weaponry mainly geared toward scoring political points.

The military ingenuity of the Yemenis is demonstrated by the fact that the Saudi regime has not been able to score any major military victory despite possessing large stockpiles of weapons supplied by the world’s leading arms merchants. The Ansarullah’s political astuteness is another factor in reinforcing their military performance.

With backing of the Yemeni masses, once they took over the capital Sana‘a, the Ansarullah managed to create an inclusive Islamic system. They have not imposed their vision on the people. It is important to remember that Zaydi Muslims do not constitute a majority in Yemen yet the fact that a minority Islamic school of thought is able to govern Yemen reflects the movement’s broad support across all segments of society. In contrast, the Saudi-UAE mercenaries are constantly fighting one another over petty issues.

As reported by Rune Agerhus, Chairman of International Solidarity Committee with Yemen (ISCY) and editor-in-chief of Uprising Today Media, “in late March of 2019, the “Supreme Political Council” of the “National Salvation Government” (established by Ansarullah-led authorities in Yemen’s capital city to fill the political vacuum) released a comprehensive reform plan titled the “National Vision to Build the Modern Yemeni State.” In 82 pages, it outlines the movement’s goals and vision for improving the conditions in Yemen, dubbed “the world’s most fragile state” by the Fund for Peace’s Fragile States Index.

The document begins with a summary of its purpose, goals, vision, and mission, “A modern, representative, stable and unified Yemen which rests on having strong institutions, the realization of justice, the pursuit of development and a dignified life and standard of living for Yemeni citizens, the protection of the independence of the nation and seeking world peace and appropriate equal cooperation with the other countries of the world.”

Ansarullah’s experience in combining military and political struggle to wrestle state control from the clutches of an autocratic system is an unparalleled event among Islamic movements over the past 20 years. This rare phenomenon will surely motivate other Islamic movements to learn from the successful experience of Ansarullah. 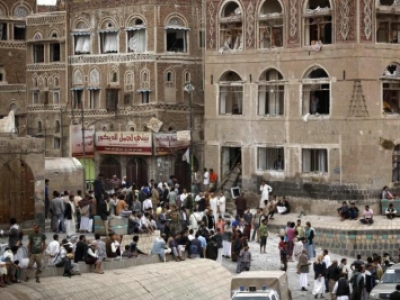 Panic grips Bani Saud as victory eludes them in Yemen