Since the coronavirus pandemic erupted in the Islamic Republic of Iran, the Wahhabi trend within the Shia school of thought, known as the Shirazi network, has again exposed its notoriety with regressive ideas.

This time, the Shirazis are undermining the public health efforts of Islamic Iran under the pretext of keeping mosques open.

Just like their ideological twin, the British installed Wahhabis in the Arabian Peninsula, who utilize a narrow interpretation of Tawhid to create sedition among Muslims, the Shirazi network utilizes the “love of Ahlul Bayt” to achieve the same objective.

After the Islamic Revolution in Iran, the regressive and literalist trend within the Shia school of thought has been significantly marginalized.

Under the leadership of Imam Khomeini, Islamic educational and governance institutions in Iran reduced the presence of literalist and sectarian personalities from positions of influence.

Of course, some managed to camouflage themselves and are still present in various posts incognito.

One of the trends that exploits Islamic freedoms in Iran is the network of Ayatullah Sayyid Sadiq Shirazi.

While Sadiq Shirazi, based in Iran, plays it “smart” and with subtlety, many of his UK and US-based followers are notorious for bigotry against Sunni Muslims under the guise of defending “true Islam”.

The most notorious of these are the UK-based Yaser al-Habib and Sadeq Shirazi’s brother Mojtaba.

The Shirazi network operates several satellite TV channels and has been severely criticized by the Rahbar, Imam Sayyed Ali Khamenei.

In 2013, the Rahbar addressing the Muslim Ummah referred to the US and UK-based “Shia Muslim” TV channels as a “bunch of mercenaries who add more fuel to the fire of Sunni-Shiite conflicts… they are given a mass media reach. And where are they based? The United States, London.”

While the current regressive actions of the Shirazis to keep mosques open for public gatherings have been picked up by the Western corporate media as another opportunity to discredit Islam and the ulama, Muslims themselves should view Shirazi type trends as the other side of the same coin.

While sectarian zealots like Abdul-Aziz al-Sheikh, Bilal Phillips or Yaser al-Habib and Mojtaba Shirazi claim to represent the so-called “opposite” sides of the Muslim Ummah, in reality, both are used as tools by imperialist powers seeking to divide and rule the Muslim world.

It is not difficult to decode who stands to benefit and who assists the narrow-minded zealots like the Wahhabis and Shirazi types.

Would it not make more sense for Yaser al-Habib and Mojtaba Shirazi to defend Islamic Iran because it follows Shia jurisprudence?

Aren’t they all about Shia first and Islam second?

These simple questions clearly expose the fact that Yaser al-Habib and other “Shias” like him, serve only the imperialist agenda: to create divisions in the Ummah.

We should all remember who created al-Qaeda and support the zealot Saudi palace scholars.

The “Sunni” and “Shia” takfiris both get a great deal of attention in the media of the US-installed despotic regimes in the Arabian Peninsula.

Their rhetoric is used to justify the US-designed oppression of Bahraini people and to incite violence in Iraq in order to justify US presence and interference there.

Thus, viewing the Shirazis and the Wahhabis outside of the Western neo-colonialist framework is an incomplete picture. 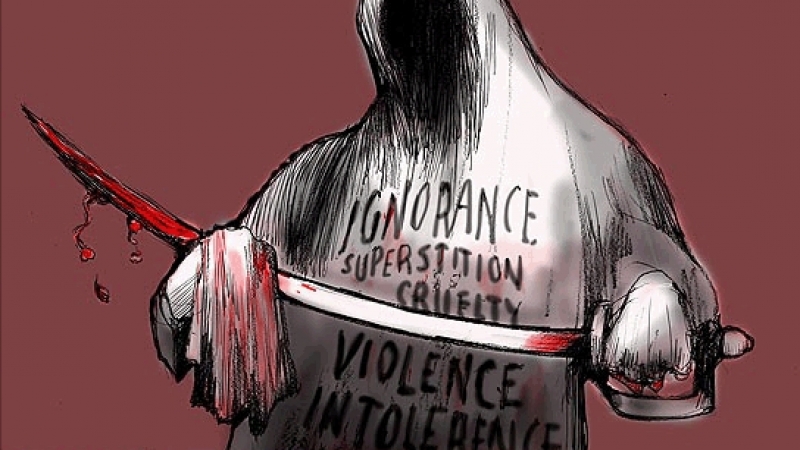 If the Saudis stay, there will be hell to pay

Sectarians open their mouths and shut their eyes