Just because the two countries have a majority Muslim population does not mean that the imposed strongmen in both concur on their national interests, or on the joint aspirations of their oppressed peoples. That their interests sometimes converge, and at other times diverge suggests that both are comfortable being pawns in a larger geopolitical chess match in which the price of survival centers around doing the bidding of those who are pushing the pawns. Case in point with regard to the graphic above: the national interests of the puppet proxies in both countries converged in the transfer of the Islands of Tiran and Sanafir to Saudi control, which came during a five-day visit to Cairo by Saudi King Salman, who sought to bolster an alliance with Egypt in the face of artificially manufactured tensions with Islamic Iran. The secret negotiations leading to the agreement cleared the way for the construction of a 9.3-mile bridge that would link Egypt and Saudi Arabia across the Straits of Tiran, a transit way for Egyptian troops and armored vehicles to come in and protect the monarchy if necessary. The people of Egypt overwhelmingly opposed the “transfer” (by the way, Israel still maintains air superiority over all of the Gulf of ‘Aqabah, where the two islands are located, as part of its security perimeter).

There is little in common between the Egyptian and Saudi regimes even if both are puppets of the West and the Saudis have tried to buttress the crumbling Egyptian economy. Their differences are coming to the fore amid rising tensions between the two oppressive regimes.

In the mid-1950s and 1960s, Egypt and Saudi Arabia pursued two very divergent trajectories in their policies. Under Jamal ‘Abd al-Nasir, Egypt claimed to be a revolutionary state whose slogans were laced with much nationalistic rhetoric. Al-Nasir’s Egypt also boasted of a revolutionary political system of sorts while power remained in the hands of a coterie of military officers. Saudi Arabia was and remains a conservative monarchy. They even supported opposing sides in the war between North and South Yemen. Thus, many factors contributed to their divergent outlooks. However, after the Camp David Accords of 1978 when Egypt joined the long list of US/NATO client regimes in the Muslim East, the factors that had contributed to their divergences began to disappear.

Egypt’s signing the so-called peace treaty (actually a treaty of surrender) with the Zionist regime resulted in its expulsion from the Arab League. It is interesting to note that while the Arab League was headquartered in Cairo, the regime of Anwar al-Sadat was excluded from the organization’s deliberations.

The Iraqi-imposed war on Iran (September 1980–August 1988), which also had the backing of the entire imperialist world, brought Egypt back into the Arabian fold. By supporting Iraq against Islamic Iran, Egypt once again came close to the Persian Gulf monarchies that lived in fear of the victory of the Islamic Revolution in Iran.

It can be surmised that despite such divergences, Egypt’s need to be closer to the Persian Gulf region was the chief reason for its interaction with Saudi Arabia. This region is considered of vital interest to Saudi Arabia given that much of the Kingdom’s oil is produced in its eastern province on the shores of the Persian Gulf.

Egypt’s dependence on the Persian Gulf states in the last two decades made it incumbent on Cairo to protect these tribal monarchies. It assumed such importance that it turned into its vital national interest. This enabled Egypt to gain immense revenues from the employment of Egyptian labor force in the region. From 1974–1993, about three million Egyptians migrated to the oil producing countries of the Persian Gulf and remitted some $72 billion in foreign exchange into Egyptian coffers during the same period.

The Egyptian economy was so badly battered and in desperate need of revenues that it even dispatched teachers and instructors to the Persian Gulf states to educate people there while ignoring the needs of the Egyptians. Today, however, the situation has changed; Egypt has been turned into Saudi Arabia’s agent in the region. Egyptians hate the Saudis’ sense of self-importance and superiority because the Egyptians say their civilization spans thousands of years while the Saudis are Bedouins and cultural hooligans that emerged from the backwaters of Najd only about a century ago. Refinement has not touched them even after ruling the Kingdom for almost 100 years.

One of the reasons why relations between Saudi Arabia and Egypt have failed to achieve stability is because they focused on superficial issues and fleeting interests rather than long-term common objectives. These kinds of examples are found in abundance in the history of the two countries.

Recent events like the overthrow of the first-ever elected government in Egypt of President Muhammad Mursi in 2013, once again led to the restoration of close relations between the two regimes. This kind of behavior accurately captures the essence of their outlook. General Abdel Fattah el-Sisi needed a foreign supporter to help him with the terrible economic conditions in Egypt while Saudi Arabia desperately wanted to end the Islamic Awakening movements and also overthrow some Arabian regimes so that the revolutionary wave could be stopped at the Egyptian borders. Bani Saud wanted to prevent such influence from spreading into the Kingdom. The speed with which these developments occurred sheds much light on the true motives of the players. Within 15 minutes of Mursi’s overthrow and his imprisonment by el-Sisi, King ‘Abdullah called the new Egyptian dictator expressing the Kingdom’s support.

Bani Saud demanded (and still do) that in return for their financial support to Egypt, the Sisi regime would adopt a policy of supporting the armed terrorist groups hired to overthrow the government of President of Bashar al-Asad in Syria. They also wanted Egypt to join the Saudi-led coalition against Yemen. While Egypt had already joined the coalition, the Saudis wanted Cairo to dispatch ground troops as well to fight against the Ansarallah in Yemen.

An additional Saudi demand was that Egypt should not have any relations with Iran (diplomatic relations were severed by the Mubarak regime under US-Zionist pressure in 1979). Further, as the most populous Arab country, Egypt was expected to stand against Iran’s regional policies.

If we look at the level of Egypt’s cooperation and Saudi goals in the region, it becomes clear that while Egypt desperately needed Saudi financial support, it has been less responsive to their expectations. During the four years of el-Sisi’s rule (since 2013), in the foreign-imposed war on Syria, while Egypt has adopted policies that were in line with Saudi requirements, el-Sisi supported Syria’s territorial integrity. Also, he refrained from making any statements about Bashar al-Asad’s future. And during all this time, intelligence cooperation between Egypt and Syria continued as usual.

During Mursi’s one-year tenure in office, while ideologically the Muslim Brotherhood wanted to support Syria’s opposition seeing them as natural allies, the real decision makers regarding Syria were the Egyptian military and intelligence agency. Thus, Mursi’s government could not take any practical steps vis-à-vis supporting the manufactured opposition in Syria. Instead, he proposed creating a quartet group for bringing peace to Syria. Mursi proposed that Iran, Egypt, Turkey, and Saudi Arabia should be part of this group. This did not sit well with the Saudis but they went along with it initially.

The Saudis showed their reluctance and indeed displeasure with Mursi’s proposal by participating only superficially in the group’s preliminary meetings. No high-ranking Saudi official ever participated in the group’s deliberations. The Saudis even refused to participate in meetings held at the level of foreign ministers or presidents thus clearly indicating their lack of enthusiasm or support for the group.

Regarding Yemen, the Saudis sought Egyptian ground troops to fight against Ansarullah but el-Sisi only sent naval forces. These were present in the Bab al-Mandab area to intercept any material help that may be sent to the Houthis.

As far as the third issue — relations and cooperation between Egypt and Iran — it is clear that el-Sisi is toeing the Saudi line. Of course this is not just to please the Saudis; this is also the policy of the US and the Zionist regime in Occupied Palestine.

America’s pressure on Egypt to not cooperate with Iran stretches back several decades to the time of the victory of the Islamic Revolution in Iran. The Islamic Revolution knocked down an important pillar of the imperial imposed order in the region, posing a serious challenge to US hegemony. It also made a number of other Western-backed and propped regimes vulnerable to revolutionary upheaval. The Saudi pressure has intensified in the last five years because of the war on Syria.

As a basket case, Egypt has for decades been the recipient of financial aid from different countries. After the Camp David Accords of 1978, Washington has provided $1.3 billion in annual aid as part of the deal. During its last year in office, the Mubarak regime received $2.3 billion in US aid. This was the largest aid package in Egyptian history but now it has decreased to the original amount of $1.3 billion as agreed in the Camp David Accords.

After Mursi’s overthrow in July 2013, the Saudis prodded Kuwait and the United Arab Emirates (UAE) to pledge $12 billion for the Sisi regime to help shore up Egypt’s crumbling economy. The major part of this aid package was to be in the form of grants (that is, free) or as deposits in Egypt’s central bank to boost its foreign exchange reserves.

Undoubtedly, the weakening of Egypt is the weakening of its people and this is also not in favor of the region or of Iran. Egyptians should place more value on their self-respect and dignity than serve as puppets of the Saudis or the imperialist-Zionist cabal. There is more to life than mere bakhshish. 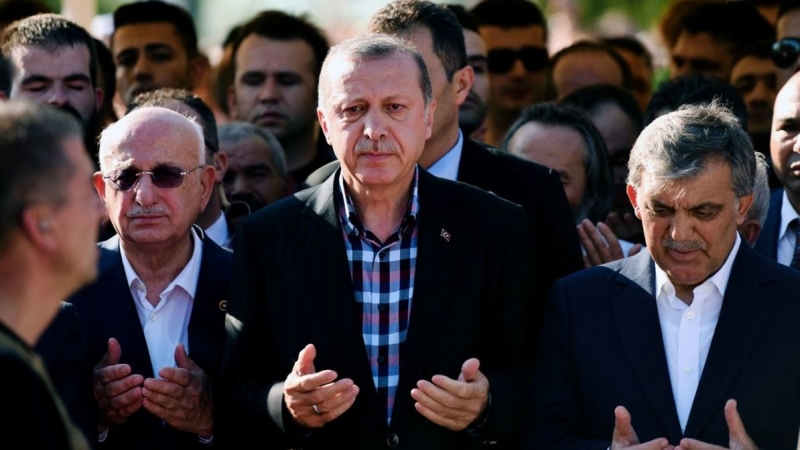 The sultan and the Shaytan

Killing of Former Egyptian President Mursi an Indictment of AU